(Yo Ho lets Go!) Jake, Izzy, Cubby, Skully, Hook, Smee, Sharky & Bones. If you have a little one in your house and they watch Disney Channel's Disney Junior (formerly Playhouse Disney) then you probably know that this cast of characters I listed are from cable's #1 series for boys ages 2-5 (but also watched by little girls) Jake and the Never Land Pirates. 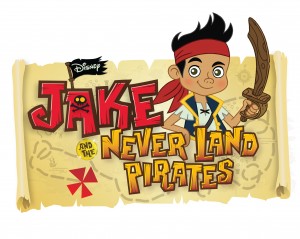 Jake and the Never Land Pirates is a music filled interactive treasure hunt (based on Peter Pan) where kid pirates (Jake, Izzy and Cubby) have many Never Land adventures while looking for treasure and outwitting Captain Hook and Mr Smee. Along the way, Jake and his crew model teamwork, problem solving, physical activities, all while earning gold doubloons as they solve their "pirate problems".

Baby B (who will be 4 in January) loves watching Jake and the Never Land Pirates. I can catch him walking around and he out of the blue yell "Aw coconuts!" or "Yey-hey no way". I think he enjoys dancing to the "pirate rock" from Sharky and Bones just as much as he does watching the show. I think we've seen all the current episodes. I find myself watching the show with him most mornings. We are usually trying to find something else to do after play time as Disney Junior is no longer running by then, it goes back to the Disney Channel older kid shows. I was glad to learn that there will be a new 24 hour Disney Junior channel that will launch in early 2012!

If your little buccaneer has watched all the Jake and the Never Land Pirate shows I have some good news for you. Jake and the Never Land Pirates has a December holiday episode on the schedule and of course will have a Season 2 of the series. Be on the lookout for Its a Winter Never Land/ Hook on Ice that will premiere Friday, December 2, 2011 at 8:30- 9:00 a.m. ET/PT. In the holiday episode, Jake, Izzy and Cubby awake to find that Peter Pan has left them gifts and a tree to celebrate Winter Treasure Day.

For more information on Disney Junior and Jake and the Never Land Pirates, visit DisneyJunior.com.

disclaimer: I received a Disney Junior/ Jake and the Never Land Pirates gift pack for my boys for sharing this post with my readers.